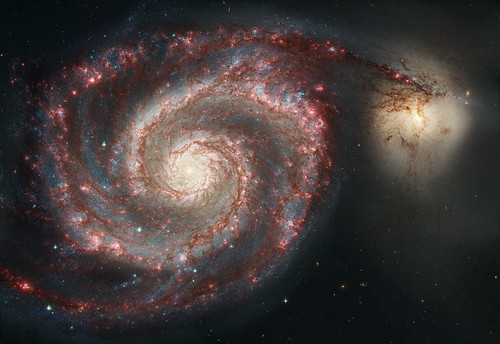 Visible light Hubble data combined with infrared data from Spitzer, went into creating this stunning image of M51, the Whirlpool galaxy. M51, as you can see, is actually two interacting galaxies (formally NGC 5194 and 5195). Credit: vdHoeven/NASA/JPL-Caltech/R. Kennicutt (Univ. of Arizona)/DSS 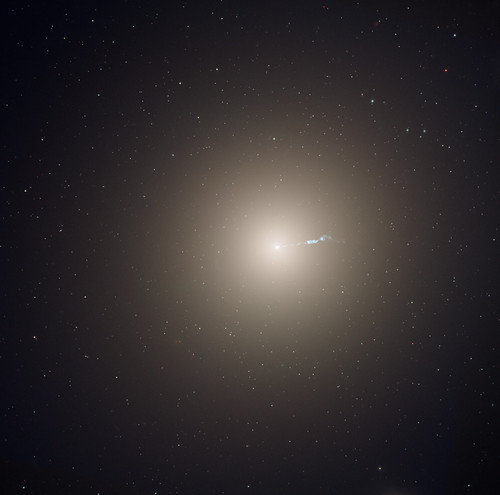 Why Is It Important to Understand Galaxies?

Galaxies show us how the matter in the universe is organized on large scales. In order to understand the nature and history of the universe, scientists study how the matter is currently organized and how that organization has changed through out cosmic time. In fact, scientists examine how matter is distributed and behaves at multiple size scales in our quest for this understanding. From peering into the way matter is constructed at the subatomic particle level to the immense structures of galaxies and dark matter that span the cosmos, each scale gives us important clues as to how the universe is built and evolves.

Telescopes like the Hubble have captured many beautiful images of majestic spiral galaxies, like this one, which is called NGC 3344.

But galaxies have not always looked this way. The grand spirals we are so familiar with (indeed including our own) were formed over the course of billions of years by several different processes, including the collisions of smaller galaxies. Giant elliptical galaxies are thought to also be formed by the process of similar-sized galaxies colliding [see videos linked at the bottom of the page], disrupting each other, and merging. In fact, it is thought that nearly all massive galaxies have undergone at least one major merger since the Universe was 6 billion years old. How Do the Oldest Galaxies Differ?

When we look at very distant galaxies, we see a completely different picture. Many of these galaxies tend to be small and clumpy, often with a lot of star formation occurring in the massive knots. The question of how these clumpy galaxies evolve and develop structure over time is a big open question in astronomy, and JWST will help astronomers to learn more. 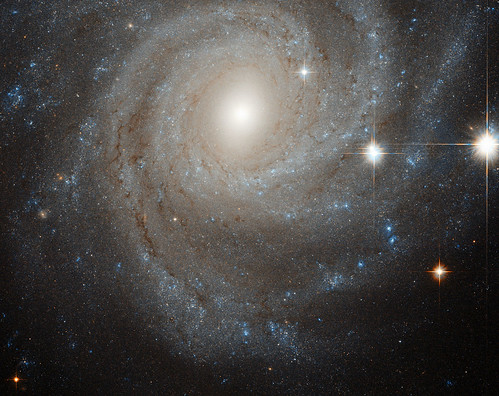 NGC 3344 is a glorious spiral galaxy around half the size of the Milky Way. Credit: ESA/Hubble & NASA More Info >

Other unanswered questions about galaxies include the following. How did the first galaxies form? How did we end up with the large variety of galaxies we see today? (We see not only organized and structured spiral galaxies in the modern universe, we also see those giant ellipticals we mentioned earlier, and galaxies in a wide variety of irregular shapes and sizes.)

We now know that extremely large black holes live at the centers of most galaxies but what is the nature of the relationship between the black holes and the galaxy that hosts them? There is also more to understand about the mechanisms that cause star formation-- whether it happens internal to a galaxy or because of an interaction with another galaxy or merger.

One thing we do know is that galaxies are still forming and assembling today. There are many, many examples of galaxies colliding and merging to form new galaxies. And in our own local neighborhood of space, the Andromeda galaxy is headed toward the Milky Way for a likely future collision many billions of years from now! (Fun fact: space is so big that when galaxies collide, the stars within them rarely do.)

JWST's Role in Answering These Questions

The James Webb Space Telescope will observe galaxies far back in time and hopefully answer these questions. By studying some of the earliest galaxies and comparing them to today's galaxies we may be able to understand their growth and evolution. Webb will also allow scientists to gather data on the types of stars that existed in these very early galaxies. Follow-up observations using spectroscopy of hundreds or thousands of galaxies will help researchers understand how elements heavier than hydrogen were formed and built up as galaxy formation proceeded through the ages. These studies will also reveal details about merging galaxies and shed light on the process of galaxy formation itself.

The Role of Dark Matter

Computer models that scientists have made to understand galaxy formation indicate that galaxies are created when dark matter merges and clumps together. Dark matter is an invisible form of matter whose total mass in the universe is roughly five times that of "normal" matter (i.e., atoms). It can be thought of as the scaffolding of the universe. The visible matter we see collects inside this scaffolding in the form of stars and galaxies. The way dark matter "clumps" together is that small objects form first, and are drawn together to form larger ones. Here is an animation that shows the dark matter distribution in the universe at the present time, based on the Millennium Simulation, the largest N-body simulation carried out thus far!

Hubble Sequence of Galaxies. Image courtesy of University of Washington

This build-up of large systems is accompanied by the formation of luminous stars from gas and dust. As stars evolve, and eventually die, they give way to new generations of stars. Scientists believe that the interaction of stars and galaxies with the invisible dark matter produced the present-day galaxies, organized into what is known as the "Hubble Sequence of galaxies", shown at right.

This process of galaxy assembly is still occurring today - we see many examples of galaxies colliding and merging to form new galaxies. In our own local neighborhood of space, the Andromeda galaxy is headed toward the Milky Way for a possible future collision - many billions of years from now! Scientists today know that galaxies existed about one billion years after the Big Bang. While most of these early galaxies were smaller and more irregular than present-day galaxies, some are very similar to those seen nearby today.

Click each image to go to a flicker gallery containing high resolution versions of each image (worth seeing and zooming into) and many related images at various resolutions for viewing and download. 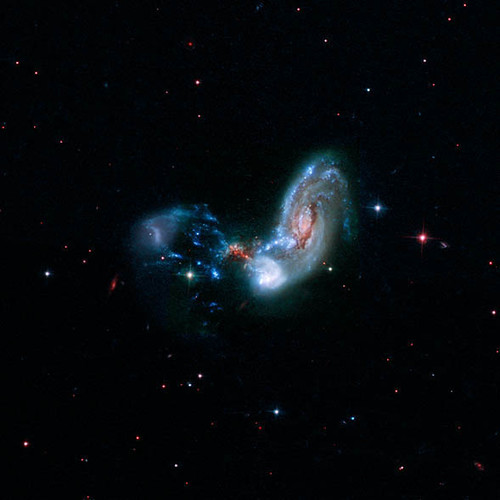 Hubble's view of the merging galaxies known collectively as II Zw 096. This is multiwavelength, from the far-ultraviolet to the near-infrared. Credit: NASA/JPL-Caltech STScI/H.Inami (SSC/Caltech) 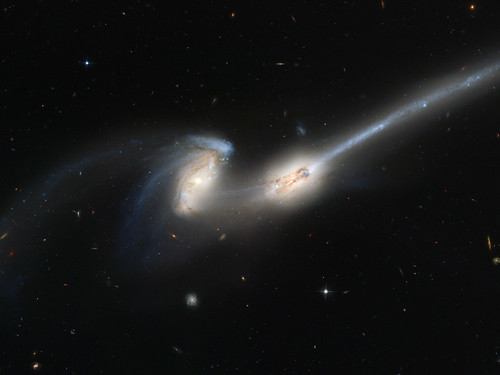 "The Mice," a pair of colliding galaxies, were given this name because of the long tails of stars and gas trailing each galaxy. They will someday be a single giant galaxy. Credit: Hubble image, NASA, Holland Ford (JHU), the ACS Science Team and ESA 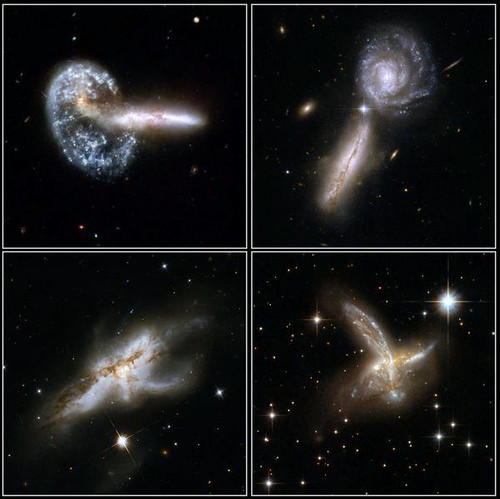 And if those weren't enough for you, here are more! (Be sure to click through to the high resolution image and zoom in!) 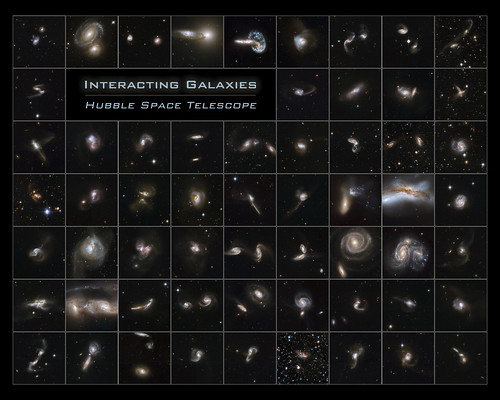 Videos of Galaxy Evolution and Formation

Here are several videos about how JWST will help us to better understand galaxy collisions, galaxy formation, and the evolution of the early universe.