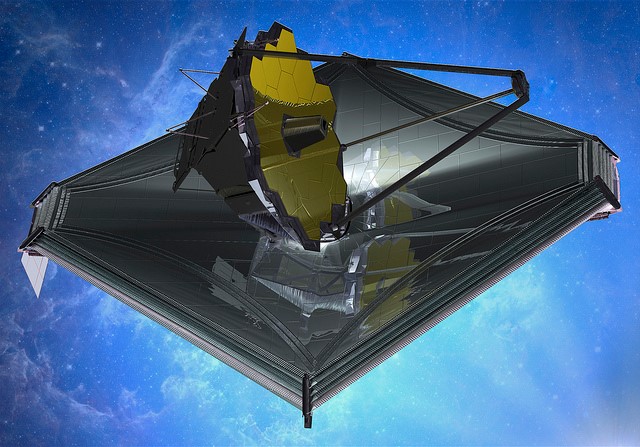 The answers are very succint due to Twitter's 140 character limit (and we also added the #xstem and #xstemchat hashtags were used in the answers). Often the questions are rephrased in the answers so that our Twitter followers would know what we were giving the answer to.

We see stars as they were when the light was emitted, billions of years ago. (Alberto Conti)

How distant can these other planets be that #JWST will be able to find water on? (kellyvictorian)

#JWST will be able to see the closest planets orbiting around stars 100 light years from earth. (Alberto Conti)

What possibilities exist for co-operation of JWST and E-ELT science teams when it is built in 2022? (anonimowy)

Like @keckobservatory and @HubbleTelescope worked together, #JWST will closely work with telescopes like E-ELT. (Alberto Conti) ELTs will also be great for spectroscopic follow up of #JWST discoveries, like current 10-meters and #Hubble today. (Jason Kalirai)

Maybe the #JWST folks can answer, when is the package going to be vibration tested? And where will that be? (30acres1mule)

Next #JWST vibe test will be after CV2 (this summer). But, vibe tests of individual components throughout I&T. (Jason Kalirai) Observatory integration & test will be in 2017 when all elements have been assembled in CA before launch. (Blake Bullock)

Is there any option to stop the mission while near earth before it leaves for far side of moon? (cottager777)

When the @Arianespace rocket launches, it's a 1-way nonstop ticket to L2. A "one chance to get it right" moment! (Blake Bullock)

Do you validate each assembly going into the final major assembly and validate it, everything shakes 2x? (30acres1mule)

We'll do rigorous testing right up to our launch in 2018 [Editor's Note: launch currently scheduled for 2021] - gotta be on time for the big day! :-) (Blake Bullock)

What other science packages will fill the JWST unit? Anything newly developed? (30acres1mule)

There are four science instruments with a range of new technologies. More here: http://bit.ly/1faTTUw. Check out amazing microshutters that were newly developed for spectrograph on #JWST: http://1.usa.gov/1mLEcp2   (Amber Straughn)

What's the next major milestone for #JWST? (lovelyrita_mm)

Next up for #JWST is the 2nd cryo vacuum test of the instrument suite. (Jason Kalirai)

Are Aramids useful in spacecraft structures or are they too brittle due to temp fluxes/xrays etc in space? (30acres1mule)

The #JWST structure is made of carbon composite material in order to perform at its operating temperature of 40K. (Alberto Conti)